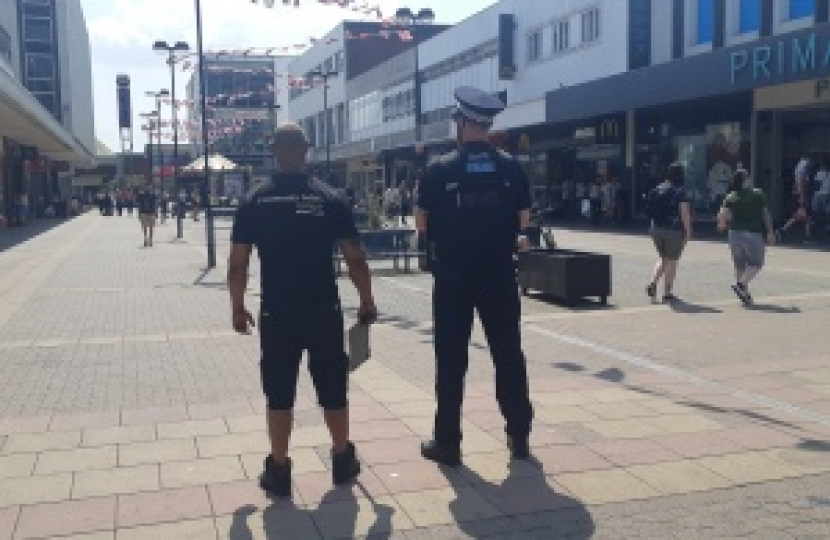 The PSPOs are in place for the safety and benefit of town centre users. They prohibit cycling, ball games and drinking alcohol outdoors throughout the town centre. Failure to comply with the PSPOs can result in a fine being issued.

During the patrols, advice was given to ten people using bicycles/e-scooters, five individuals regarding alcohol and two youths who were playing football in the area. One fine was also issued to a person who refused to get off their bike.

Whilst patrols have been carried out regularly by the community safety team, this week's work takes place during Antisocial Behaviour Awareness Week, which aims to highlight and educate people about the impact that anti-social behaviour can have on the wider community.

Tonight (Thursday 21 July) a report will go to Harlow Council’s Cabinet, which will recommend that the PSPOs are extended for a further three years. They have been in place since 2019 and were initially put in place for three years.

“The council’s Community Safety team work closely with Essex Police, our Police, Fire and Crime Commissioner’s team and other law enforcement agencies to tackle antisocial behaviour in the town. Antisocial Behaviour Awareness Week brings into sharp focus the need to never be complacent about confronting crime in every shape or form in our community.

“Public Space Protection Orders, underpinned by robust legislative powers, enable the council to take more rapid action with the police to curb antisocial behaviour. That is why the council intends to extend the existing two orders in the town centre.

“Harlow is a safe place to live and bring up a family. To ensure it remains that way, there is a zero-tolerance approach when it comes to dealing with antisocial behaviour. The council continues to take steps in collaboration with the town’s policing teams to provide a proactive response.”

Residents in Mark Hall North are invited to have their say on proposals to enhance the protection of the conservation area’s character and features.