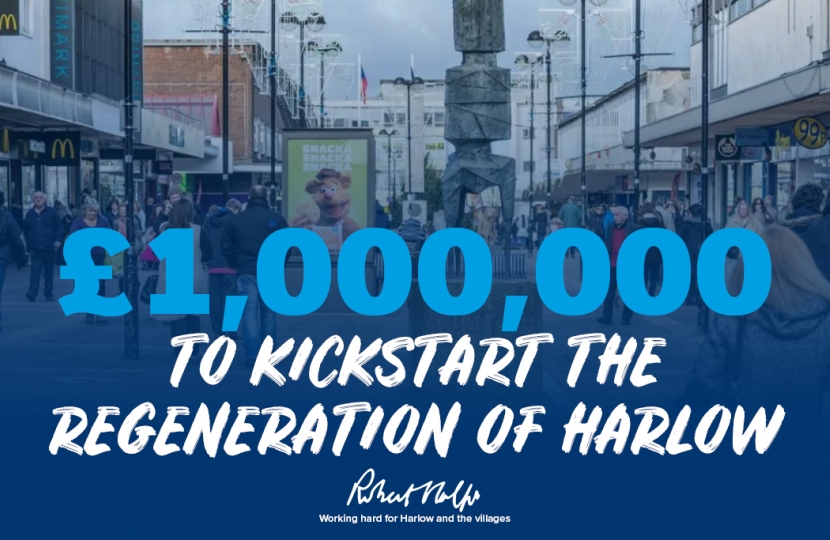 HARLOW’S MP, Robert Halfon, has secured £1 million in accelerated funding as part of the Towns Fund, which could see an extra £25 million to regenerate the town. The funding will be used to kickstart the projects to level up Harlow with better infrastructure and a regenerated town centre.

Commenting, Robert said: “In December’s election, I pledged to build an even better Harlow and today we are seeing even more money coming into our town to do just that. We have a once in a generation opportunity to secure up to £25 million to regenerate our town and this £1 million will kickstart those regeneration projects. I am fighting to ensure that our bid for the £25 million will be used in the town centre, Bush Fair and The Stow amongst many other things.

“This funding follows over £6 million in August to remodel Harlow College, redevelop the town library and create jobs at the Science Park.

“It is because of good news like this that I believe that as we emerge from the crisis, we can do so with optimism – optimism that we will rebuild, stronger than ever before.”

The £3.6 billion Towns Fund was announced last year and will benefit 101 towns as part of the Government’s plan to level up the country.

Building an even better Harlow

Central to everything we do, is our determination to level up our town with better infrastructure, more jobs, new technology and brilliant opportunities.