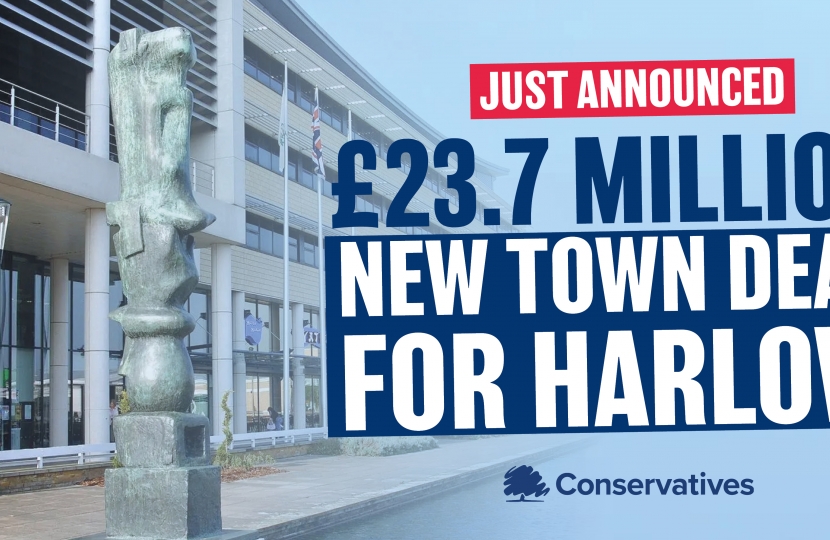 The Government has today announced that Harlow will receive £23.7 million to build much needed new infrastructure, create jobs and regenerate key areas including:

This new landmark building will support all sustainable and public transport modes and create workspace for small businesses - replacing the existing bus station.

Much needed investment will make Broad Walk a better and more attractive place to shop and work.

Harlow College will see many aging buildings remodelled to create an Institute for Technology which will create local skills opportunities focussed on science, technology, engineering and mathematics - supporting our young people into jobs at the Science Park and Public Health England.

A new link road in the Templefields Enterprise Zone will make the site far more accessible for businesses and workers creating prime connectivity, to boost jobs and enterprise.

The whole Town Deal is set to create 810 new local jobs, cut crime by 10%, increase footfall in the town centre by 20% and will result in a multi-million boost to the local economy.

The Harlow Conservatives lead on the town’s regeneration, Cllr Dan Swords, has hailed the new investment. He said: “This is a brilliant day for our town. The Government is investing massively to make “building back better” a reality and not just a slogan. This huge boost to our local economy will make Harlow an even better place to live, to work, to start a business, to raise your family and to socialise.”

The Leader of the Harlow Conservatives, Cllr Andrew Johnson,added: “This is yet another example of this Conservative Government working with our MP, Robert Halfon, to deliver major investment for our town.

“The £23.7 million announced today will create 580 new local jobs, 230 new construction jobs and help to bring even more investment into the town.

“We promised to regenerate our town and build an even better Harlow and the Conservatives are delivering it.”

Harlow's MP, Robert Halfon, added: “At the 2019 General Election, I pledged to Harlow residents that I would seek Government investment of up to £25 million to help regenerate our town centre and build an even better Harlow. I have kept that promise.

“After campaigning and working hard in Parliament, the Government has announced today that Harlow will receive £23.7 million to help regenerate our town centre, create an Institute for Technology at Harlow College, deliver much needed regeneration of Staple Tye and a crucial new road link at the Enterprise Zone. This investment will create hundreds of local jobs and opportunities for Harlow’s young people.

“I give thanks to members of the Harlow Towns Fund Board and especially Harlow Council Officers at the Civic Centre, particularly CEO Brian Keane and Jane Greer and her team, who worked tirelessly on the bid proposals to the Government. They are unsung heroes.

“This new investment comes on top of the £600 million new hospital, the £81 million new junction 7a, 7 major school upgrades, urgent upgrades for PAH, a £2.5 million upgrade of Harlow college - on top of the £12 million Advanced Manufacturing Centre, the multi-million pound Enterprise Zones and Science Park and the many other significant Government investments into Harlow.

“This is incredible news for our town and sets Harlow on the path to an even more exciting future. The Government investment announced today is yet more proof that we are building an even better Harlow. I will continue to do all I can to champion Harlow, work hard for Harlow and fight for Harlow in parliament.”