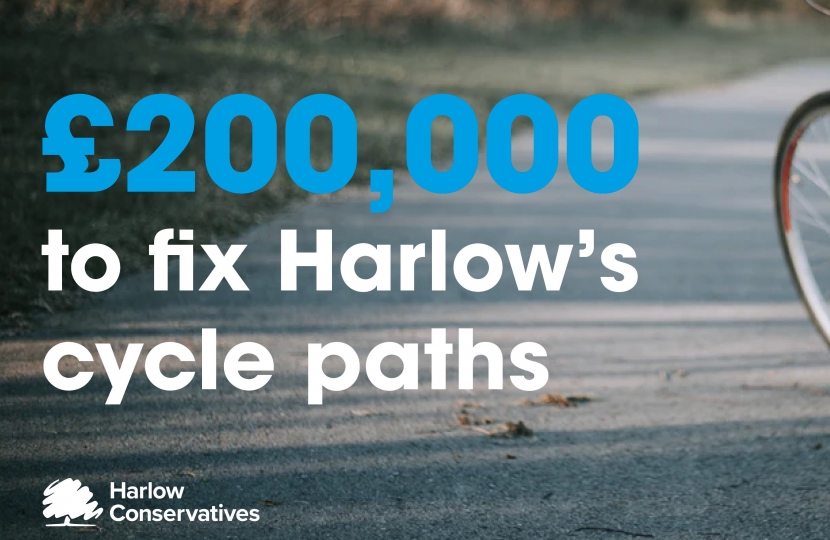 £200k is being invested by Essex County Council to make three key cycleways in Harlow safer, greener and healthier.

After taking advice from all four Harlow County Councillors and town cycling enthusiasts, the money will now be spent on the key cycle routes known as H6, H7 and H12.

These repairs will be taking place over the next few weeks, residents may spot the crews carrying out their work.

Further money is set to be invested by Harlow Council, reflecting the smaller proportion of town cycleways owned by the Council.

“As we all know, Harlow was designed in the post-war period as a new town and the environmental vision of planner Sir Frederick Gibberd is really coming into focus now. Harlow is a town with excellent cycle routes which are a gift and worthy of investment.

“Extra crews responding to defects nominated by councillors also help meet our crucial Safer, Greener, Healthier aims to support people’s choices as we all move toward walking and cycling.

“Reducing car use makes us physically and mentally healthier and reduces the risks from local pollution and reduces congestion on the roads. We will be in better position from now on to maintain these superb cycle links throughout Harlow.”

Harlow’s proposed East-West cycle route from Hamstel Road is planned to be built with part of the County Council’s cycling capital budget.

Safety-critical repairs should still be reported to Essex Highways and these will continue to be inspected, with appropriate action taken. As Government and councils work to get more people walking and cycling with better facilities, cycleway works across Essex are being prioritised.

Dear editor: Harlow deserves a Council that will build back better

After all we have been through in this pandemic it isn’t enough just to go back to normal. We have been through too much frustration and hardship just to settle for the status quo – to think that life can go on as it was before the coronavirus.